Important Vulnerabilities And Smart Ways To Be Secured From Them | Briskinfosec 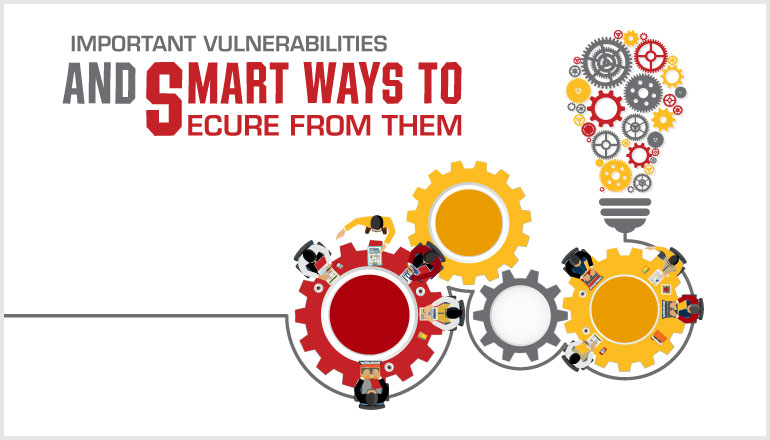 Important Vulnerabilities And Smart Ways To Be Secured From Them

In Cybersecurity, despite a large number of new applications and advanced software, the number of vulnerabilities continue to increase. Security advancements are indeed stunning but fail to be on the winning side against security vulnerabilities, with the below facts testifying it.

Generally, injection is a word towards is resented by kids. It is even petrifying the Information Technology practitioners of all ages. The reason is, the word injection which was once used as a remedy is now being used to create tragedy in security.

About, 19% of the total vulnerabilities in 2018 have occurred due to Injection attacks. There are various kinds of Injection based attacks. Few of the significant ones are

Despite all these injection attack occurrences, SQL injection is the most popular one. Let’s have a quick outlook on what it is.

Let us discuss a scenario:

You’re owing a completely automated car that does all its processes based on the commands of you through a standard web form. It may be like:

Travel and if so .

Travel over the GT bridge and stop at Hotel Continental for eating at 2.00 P.M in the afternoon.

Well, the values in bold are the one’s stated by you. Just envision a situation when an intruder tampers the inputs like:

Travel over the GT bridge and crash the hotel gate of Continental at 2.00 P.M in the afternoon.

Since, your car is automated, it parses the commands and crashes the Continental hotel gate instead of stopping there. It can’t distinguish between malign and benign ones.

This is the exact concept of SQL Injection. Hackers can inflict malicious codes in to the server and can make everything to go haywire. To know more, please check this link.

XSS is another scripting injection attack that makes its name consistently in the OWASP top 10 vulnerabilities list. Let me explain you the concept of SOP in order to help you understand XSS better.

XSS is a method of deceiving the SOP concept in flawed applications. Just imagine that someone sends random HTML codes; they aren’t sanitized and get reflected on the page. Then, an intruder can also send his own HTML codes which will also be reflected on the user interface page as it’s also the same type of HTML codes. Through this, the intruder can catch sight of the important data in the website and can even manipulate it to his/her own advantage.

To know more about it, kindly refer this link.

It’s another type of injection attack. Here, the attacker uses an XML query against a vulnerable target and tries to gain access to its sensitive files. If successful in this attempt, then the server/database can be compromised and sensitive files could be at risk.

This is also another type of injection attack.

The host header problem arises when a webserver hosts several websites on the same IP address. This leads to a doubt like which website should accept the incoming request first? Think what would happen if an intruder specifies a malicious host header?

The default configuration of most of the webservers is done like, they send the unidentifiable request to the very first virtual host in the list. If it’s illegitimate and if the virtual host without verifying and sanitizing accepts it, then its server can be compromised. This is one hell of a threat that’s shown steady rise in the recent years. To know more, kindly check it out over here.

Whenever we send a request to the server, it responds back to the browser. The HTTPS response that we get is distinguished into two special characters as CR and LF. CR refers to Carriage Return and LF refers to the Line Feed. CR and LF have an ASCII (American Standard Code of Information Interchange) value of 13 and 10 respectively. CR is denoted as \r and LF is denoted as \n. Together, it’s called as CRLF. This attack is possible to happen if an intruder inflicts malicious CRLF characters into a vulnerable web server. Also, this injection attack is like a gateway for many other attacks to penetrate.

This attack is primarily utilized for log poisoning and HTTP response splitting.

Log poisoning – Here, the intruder impersonates the malign log entries as benign ones. This is done in order to deceive the user and make them to click it.

Many applications use API to process their request and get their response. Many businesses widely use API. Probably, that is also the reason why API (Application Programming Interface) vulnerabilities are being more prevalent these days. Few of the highly happening vulnerabilities in API are

It stands for Man-In-The-Middle attack. Here, as the name suggests, the middle person (intruder) tries to spoof the communication between the sender and receiver. Best possible mitigation for this is to use HTTPS protocol powered by SSL/TLS certificates.

SQL stands for Structured Query Language. This is an injection attack where in an attacker injects some malicious codes into the legal ones, and the server executing it. Best way to remain protected against this is to use anti-SQL commands or by using ORM’s Hibernate software.

DDoS stands for Distributed Denial of Service attack. It’s an upgradation of DoS (Denial of Service) attack. Here, the attacker sends continuous requests from different locations to the same server in order to deface or crash it. Best way to remain safe against this attack is to blacklist the unwanted IP’s. IP whitelisting also helps.

IP whitelisting is a process that has a list of IP’s which the API is supposed to process. This security deed helps the API to stay away from processing suspicious domains.

This security feature helps the employees to maintain normal and proper privileges instead of super user privilege. This, in turn, helps the API to process normal requests and prevents it from becoming inundated with the excessive processing works. This implementation helps to escape from Dos and DDoS attacks.

Higher the need, higher is the threat around it. Similarly, API usage has been increasing every year and so are the threats in it. In 2018, these vulnerabilities have increased by 23% when compared to 2017. Above all, a proper API security assessment is mandatory in order to keep it secured. To know further, kindly check out over here.

The most famous CMS is WordPress. About 55% of all the websites are built and developed with WordPress. But, one astonishing factor is that WordPress has also registered the highest number of vulnerabilities, with 30% increase from 2017. According to the WordPress official site, the current collection of plugins is 55,271. Due to the familiarity of WordPress, Joomla and Drupal in CMS, more hackers are striving to find loopholes in order to launch malicious codes and breach countless websites that’re developed through it.

Now, let’s have a quick outlook at couple of the biggest vulnerabilities in CMS platform:

Open Source CMS like Drupal and WordPress are highly prone to such kind of vulnerabilities. The key factor is because of their dominant usage in the client-side. Also, due to the growing number of third-party CMS plugins, XSS attack is for sure, one of the biggest threats to CMS.

What would happen if an attacker detects a vulnerable CMS platform and launches some malicious codes in it? Then, think further about the websites that are developed through it? Well, the attacker could plant a backdoor though remote or local access and easily compromise the information in websites; if it happens, the consequences are imaginable.

Drupal is the third most popular Content Management System. Two major vulnerabilities named as Drupalgeddon2 (CVE-2018-7600) and Drupalgeddon3 (CVE-2018-7602) that were lurking in Drupal, led to the security breaches in countless number of web servers in 2018. These vulnerabilities facilitated the intruder to remotely shove illegitimate codes and execute it on the common Drupal installations. It was patched, however. To know more related stuff, kindly check out over here.

One of the most popular programming languages for developing/building a website or web application is PHP. PHP platform has been under threat due to flaws like:

Source Code Revelation: What happens when an intruder gains access to the source code of an application? Well, the impacts can be visualized. Hence to prevent them, DevSecOps (Security in the development phase itself) should be implemented rather than DevOps (Development without implementing security).

RFI stands for Remote File Inclusion. This is about some remote files getting infiltrated into your codes. You may ask, what’s the big deal in it? But, what if the penetrated codes are rogue ones? Well, then it’s really a huge deal right? Yes, absolutely it is!

Fortunately, fixing this isn’t tedious. You need to open your php.ini and checkout the settings on the below:

Whenever a session is set up between a client and server, PHP stores the session ID as cookies that’s like PHPSESSID. What is the case when someone steals the cookie key? Is it worrisome?

Well, if some important session is ongoing like your entering your bank credentials (account number, CVV number and OTP to verify) and at that moment if the session ID is captured, then there’s nothing more disastrous than that for you. It’s because the entire money in your account could be hijacked and within a snap, you’d become a pauper.

To prevent this, maintain your session ID in a place where your own scripts alone can access.

Other significant flaws/vulnerabilities in PHP are SQL injection, XSS, CSRF that’re briefed above.

Conclusion: Best Ways To Protect Your Apps and Data

Well, all these security vulnerabilities must be undoubtedly annihilated. But, is there a panacea for it. Honestly and sadly, No!

Security is always an ever-broadening horizon and hence, you must be learning every day. Here are some of the useful tips which developers, security folks and organizations should follow in order to remain on the shore that saves you against the tide of cyberthreats.