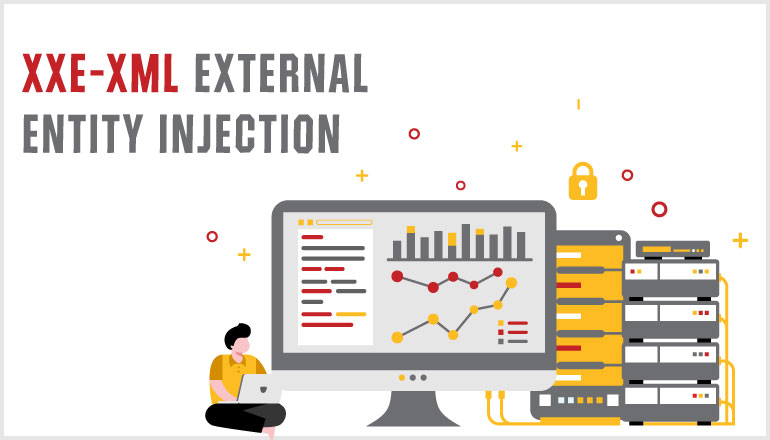 XML External Entity Attack happens when an application allows an input parameter to be XML or incorporated into XML, which is passed to an XML parser running with sufficient privileges to include external or system files, which results in vulnerabilities like file inclusion, Server side request forgery and Remote Code Execution.

Recently, there’s been an increase in the use of XML documents due to the growing use of the web services such as REST and SOAP API, which commonly uses XML to process the data.

Example for an Internal Entity:

In the first line, we have defined an entity “name” having a value “Brisk”. The block used to define the entities is known as the ‘DTD block’. Next, in the third line, you can see that we have referenced the entity “&name;”, which holds the value “Brisk.” In this way, we don’t have to input the name each time. All that we have to do is use a reference to the entity.

Example for an External Entity:

XXE injection can be detected using either automated or Manual techniques. To find an XXE (XML External Entity) injection vulnerability manually, either the attacker or tester needs to inject XML characters in all input fields and observe if XML parsing errors gets generated.

Latest version of Burp Suite scanner can detect both traditional XXE and blind XML External Entity injection with a help of built in payloads and by analyzing the server’s response time.  Below image shows the automated scan output of burp suite tool which detected a XXE injection using some built in payloads.

XXEinjector is a ruby based script which automates retrieving files using direct and out of band methods. Directory listing only works in Java applications. Bruteforcing method needs to be used for other applications.

Below are some example command of XXEInjector tool usage,

XXExploiter is a javascript based tool to generate the XML payloads, and automatically starts a server to serve the needed DTD's or to do data ex filtration.

It can be installed using npm with below command

Use information disclosed in error messages to determine at what file path the XML parser is parsing. Also, try to load files that don’t exist to determine the operating system type and the path at which interpretation is taking place.

By Using the section of XML input, we can try to access local files like /etc/ passwd files of a Linux server.

Now-a-days, API applications are gaining significant traction and hence are predominantly being used in almost all the software firms. API applications use XML parser in the backend for processing the user’s inputs from the frontend/application. This XML parser is prone to XML external entity injection attacks when the user inputs aren’t properly sanitized. Hence, a complete security assessment that scrutinizes the entire attack surface of your applications is mandatory.