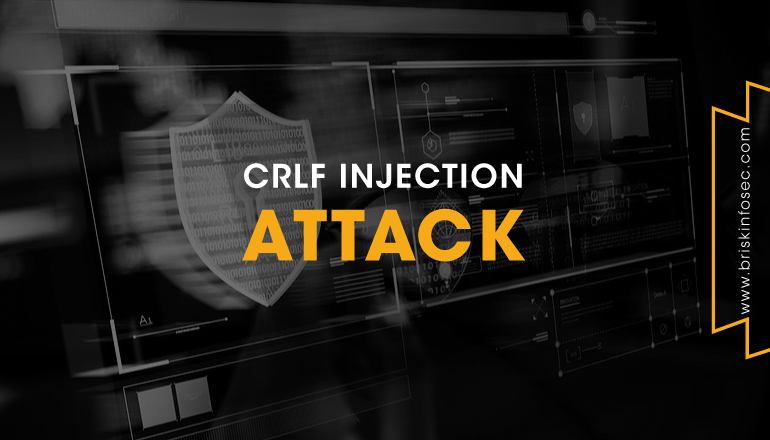 Whenever a user sends a request to a web server, the web server replies back with the response that contains both the HTTP headers and the actual website contents. The website contents are separated by a specific combination of special characters, that is carriage return and line feed simply known as the CRLF. The server knows, when a new header begins and ends with CRLF. This tells a web application or user where a new line begins, whether in a file, or in a text block.

These vary depending upon the operating systems:

In Windows, both a CR and LF are required to note the termination of a line whereas in Linux/UNIX, a LF is only required.

In the HTTP protocol, the CR-LF sequence is always used to terminate a line.

What is a CRLF injection vulnerability?

CRLF injection is carried out by an attacker by just simply inserting the carriage return line feed in the user input area to deceive the server or a web application, thus making them to think that an object is terminated and another new object has been started.

This vulnerability arises very commonly in the HTTP request of web application that accepts the user supplied input from an untrusted source, without being properly validated for malicious character (CRLF).

The impacts of CRLF injection varies and the risk depends upon the type of scenarios. CRLF Injection allows an attacker to inject client-side malicious scripts (E.g. Cross site scripting) to disclose information. An attacker can gain sensitive information like CSRF token and allow the attacker to set fake cookies. CRLF Injection enables an attacker to deactivate and bypass certain security restrictions like XSS filters and Same Origin Policy (SOP) in the victim’s browsers, making them susceptible to further malicious attacks as below:

In this scenario, we can set a fake cookie value in to the application, which often leads to client-side cookie injection vulnerability.

In this scenario, we can set a new header value in the URL Parameter with some injected CRLF characters.

Here, (E.g. My_Header:New_Header_Value) we injected the header in the GET parameter of the request.

The server responds to the tampered request without restricting it, and prints the injected header in the server response. New Header is added like Pragma, Cache-Control, Last-Modified, and it may lead to cache poisoning attacks.

Scenario 3: In this scenario, we can probably inject and execute a malicious script in a redirection request combined with CRLF characters to bypass the filter and redirect the user to a malicious crafted website. Also, we’ll be able to run the malicious client-side javascript.

Here, we’ve injected the?Redir.php?c= parameter and through this, we would be able to inject a malicious URL (E.g. url=xssposed.org CRLF INJECTION XSS OPEN REDIRECT) followed with a malicious client side javascript (E.g. ).

The response shows that the original site gets redirected to the crafted fake website and alongside this, the injected malicious client-side JavaScript also gets processed by the server without validation and gets executed as shown in the above response.

Application developers should take excessive care and think in the mindset of a hacker. This will help them to create a secure application. In the Application security aspect, the user supplied input should not be trustable and it must be validated properly before accepting it into the application. We must possess good development practices coupled with security methodologies to preserve ourselves from worldly threats.

Briskinfosec provides top notch web application security assessments and assesses the entire attack surfaces. Pertaining to this, we vigorously validate the user inputs and if any malicious or strange inputs are discovered, we block them. We completely encode the output in HTTP headers, blinding those to the eyes of intruders. Further, we also provide practical awareness on all possible web application issues.

Similarly, Briskinfosec creates Threatsploit Adversary report on a monthly basis. It’s a report that contains the occurrence of global cyberattacks, its causes, its impacts and much more. Instead of looking in search engines and websites about the worldwide cyber breaches and others, just a single click on our report is enough. It will enamor you!

Getting Started with Frida

Are you still fighting against decade old application attacks?