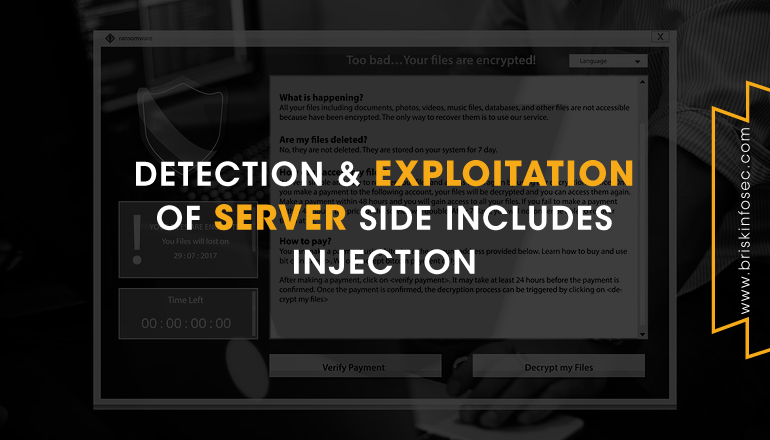 Server Side Includes (SSIs) are directives present on web applications, used to feed an HTML page of the application with dynamic contents based on user’s input. It is a feature that allows developers to dynamically generate web content (html) by using ‘#’ directives. SSI directives are similar to Common Gateway interfaces (CGIs), except that, SSIs are used to execute some actions before the current page is loaded. In order to do that, web server or the application, search for SSI directives in the HTML code and executes them before supplying the page to the end user.

Server Side Includes Injection vulnerability allows an attacker to exploit a web application by injecting scripts or SSI directives in HTML pages. SSI injection attack is done by manipulation of SSI used in the application through user inputs.

In order to detect SSI injection vulnerability, we can check whether the application is sanitizing html or SSI directive inputs as shown below:

SSI injection is a rare vulnerability, but if exploited, gives a system level access to the intruder. Attacker can manipulate the file system and run system commands using SSI injection exploitation. Since it’s a rare vulnerability, there is a high probability that developers might not be aware of this and while using a SSI directive, developers might not properly sanitize the user inputs. Hence, Briskinfosec recommends to conduct application security assessment for public as well as to corporate internal applications to avoid such vulnerabilities which poses a serious threat for an organization’s reputation.

Briskinfosec provides proper website/application security assessment and assesses your security environment. During the assessment, we completely validate the user inputs in the URL and hunt for figuring out strange ones. Once identified, we eliminate it with our experienced security folks and make mightier, your security defenses.

Haven’t you read our Threatsploit Adversary report. If so, read it out. It’s a single report that contains the collection of worldwide happened cyber breaches, the reasons for those to surge, the repercussions organizations had to undergo, the remediations for those, and much more sane things. Click it and you’ll feel blessed to have got the most time-consuming ones, in just a fraction of second.