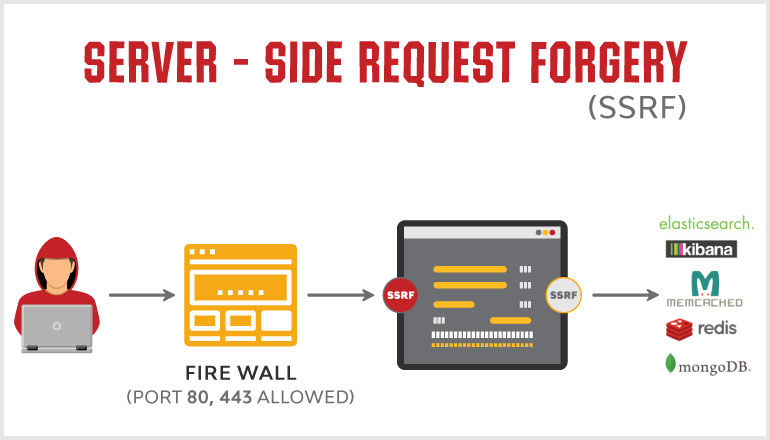 Server-Side Request Forgery (SSRF) is an attack in which, an attacker can abuse functionality on the server to read or update internal resources.

Server-Side Request Forgery (SSRF) refers to an attack, wherein an attacker can send a maliciously crafted request from a vulnerable web application. SSRF is mainly used to target internal systems behind WAF (web application firewall), that are unreachable to an attacker from the external network. Additionally, it’s also possible for an attacker to mark SSRF, for accessing services from the same server that is listening on the loopback interface address called (127.0.0.1).

What are the further Attacks that are possible via SSRF?

It helps the attacker to bypass the IP Address Whitelisting to perform his attacks.

Misusing the Trust relationship between the vulnerable server and others.

It helps the attacker to bypassing the Host-based authentication services.

It allows the attacker to View status pages and interact with the APIs as the webserver.

SSRF allows an attacker to perform a port scan to further enumerate other systems.

It allows the attacker to scan the internal systems and services which are behind the vulnerable system.

It provides a Pseudo-anonymity for the attacker as the requests are routed via the vulnerable system.

Attackers can use HTTP to enumerate other protocols. It is possible to make a request to other protocols through a web browser over HTTP, using URLs such as “ssh://”, “ftp://”, and “file://”. (E.g. PHP also supports quite a few other protocols such as (fopen(), copy(), filesize())by default, which makes SSRF vulnerabilities on PHP servers especially dangerous.)

As the attacker’s request is blocked by the firewall, he cannot send a direct request to the victim’s server, so in order to attack the target server the attacker has to:

A Simple Scenario for SSRF

Typically, Server Side Request Forgery (SSRF) occurs when a web application is making a request, where an attacker has full or partial control of the claim that is sent. A typical example is when an attacker can control all or a part of the URL to which the web application makes a request to some third-party services. Here, I had captured the parameter of file= URL, and I’ve tried to perform this server-side forgery attack.

One of the most notable breaches of 2019 was the Capital One breach, where the attacker used a Server Side Request Forgery (SSRF) attack to steal data.

On 29th July 2019, Capital One Financial Corporation announced that they had determined there was unauthorized intrusion takes place by an unknown outsider who stolen customers Personal Information those who were applied for credit card product and Capital One credit card customers details.

Capital One states that this breach affected,

The attacker gained access to data that approximately included,

What Capital One had Done?

Capital One immediately fixed the issue and immediately began to work with federal law enforcement and captured the intruder with the help of the FBI. The Government makes sure that there is no evidence the stolen data was used for fraud or shared by the attacker.

A Copy of the Complaint for the Violation tells this.

Outline of the Breach

Technical Summary of the Attack

Here is a summary of how the Capital One breach happened,

By this attack, an attacker can gather information about ports, IP addresses, Remote Code Execution (RCE), and can also discover the IP addresses of servers running behind a reverse proxy, etc.

For example, I had tried SSRF attack on a testing site for your reference.

POC 1: In Burp Suite, I checked for some different redirection parameters other than URL=, and in the search field, I’ve tried with various parameters. By using this parameter of file=, I’ve captured the request of the particular path and had sent it to the repeater.

POC 2: Request is captured from the search file in the repeater, and here in file feed, a .jpg file is available. Now, I had removed the file and entered a third party URL on file Redirected URL: https://www.expressvpn

POC 3: Once I click on Go to capture response, the response is changed to expessvpn.com and you can see the IP of the testphp.vulnweb.com.

POC 4: But in the render page, you can see the expressvpn.com site getting loaded that confirms the SSRF attack as shown below:

Never trust and accept the user supplied inputs blindly into the application. The Application should validate and sanitize user given inputs to avoid SSRF attack. (E.g. do not allow a request to private IP (non-routable) addresses and internal services (as detailed in RFC 1918).

Create and use a customized error page (that does reveal any information about the application) to all the users when an error occurs. An unhandled error response might end up in revealing sensitive information or data leakage about the server to the attacker, when any other raw response or different parameter is used.

URL schemes other than HTTP and HTTPS should be blacklisted. Instead, these two mentioned protocols should be whitelisted thereby blocking different schemes which are not in use like file:///, direct://, feed://, touch://, and FTP://, which might prove to be dangerous for SSRF.

Implement a Next-Generation Firewall with a powerful and latest rule set that will block most of the web based attacks and provides a maximum security (Note: Remember Firewall is also a product is not a permanent solution to cyber threats, it is added advantage to the application that gives some extra protection).

By default, services such as Memcached, Redis, Elasticsearch, and MongoDB do not require authentication. An attacker can use Server Side Request Forgery vulnerabilities to access some of these services without any authentication. Therefore, to ensure web application security, it’s best to enable authentication wherever possible, even for services on the local network.

Hackerone explains about the SSRF in more detail. Server-Side Request Forgery is an extremely lucrative vulnerability among the hackers, especially when your business infrastructure is on the cloud. It is hard to completely remove a vulnerability such as SSRF but it is better and best to mitigate the effects of exploitation by following all the necessary best practices and remediation measures such as OWASP cheatsheet etc.

Security is a shared responsibility it is also good to consult or get guidance from a Cyber Security Solution Provider to get your business in a right path.

To practically educate about these issues and to provide contemporary security quality, a competent cybersecurity firm is mandatory. Briskinfosec security professionals validate the input parameters of the incoming requests through effective security assessments. We scrutinize them and encumber those, if detected vulnerable. We also deliver you, noble notions of cyber awareness against both old and latest cyber threats, educating you to be cautious against such possible threats.

Curious to read our Case studies?

Last but not the least

People check out for the recent and significant cyberattacks, to gain knowledge and sometimes, to check the affected companies. For doing so, they’ve got to search spotlessly and at some point of time, they feel tiresome. But, Briskinfosec provides you an easy way to acknowledge the recent and significant cyberattacks, the impacts of them on respective organizations, the losses faced by them and all these are done in just one single report named as Threatsploit Adversary Report. Check them out and they’ll surely be fulfilling.