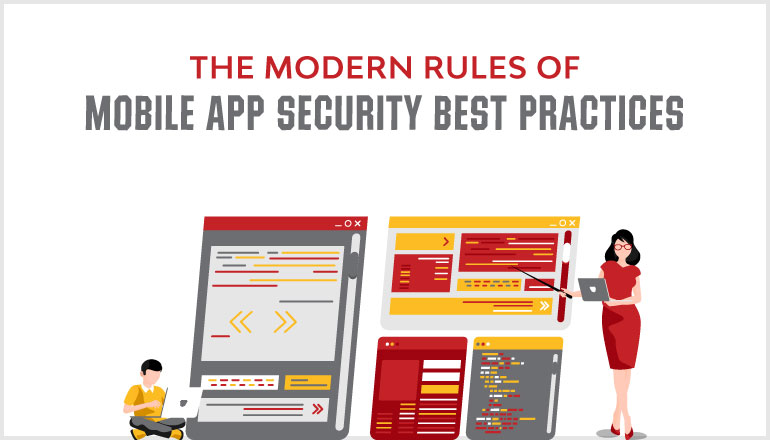 Before heading into the concept of “Mobile App Security Best Practices” let’s not forget the undeniable fact that thousands of mobile applications for both Android and iOS platforms are being released every day. Post-development, mobile applications are being released rapidly with the implementation of DevOps technology alone, thus forgetting the whole concern in this deed about the security need. To implement security in the development phase itself, various firms follow practices like SDLC, Secure Code Review, and Pen-testing methodologies, but are they all being done?

Even if so, are they all being done effectively in a flawless manner? To implement all the above security concepts prudently, you can follow the below security best practices.

Is your communication channel safe?

Nowadays, most of the apps are server-dependent, which are sending and receiving the data using web services and from its endpoints. On this basis, every mobile app uses HTTP/HTTPS protocols for the communication of data transmission. On the mobile application, intercepting the HTTP/HTTPS traffic itself is a vulnerability, and sending the data in HTTP protocol is an unencrypted communication.

This type of security issue can be addressed by implementing strong encryption protocols and ciphers and application should support HTTPS traffic only. To stop intercepting the mobile app traffic, developers have to implement TLS/SSL certificate pinning.

Are you trusting Built-in Platform Security?

When it comes to the release of your Apps on Android and iOS platforms, are you aware of its built-in platform security?

This is because you may have implemented security on the Application level, but still your mobile app can be vulnerable because of OS-level issues.

Currently, both the Android & iOS platforms are having their techniques to identify the malware apps, in protecting the app's data, and on releasing security patches. In Android, recently ‘google play protect’ has been started to use for scanning the apps in mobile devices, and also from every OS update, it's releasing the new libraries and options for developers to secure their mobile apps such as network configuration options from Android Nougat.

For iOS, Apple is always strict right from the time of releasing the apps in the app store but there are still some security bugs are identified in every ios versions. Both platforms have their issues, and it confirms that you can't trust their platform security alone to protect your applications.

Are you following secure code review?

To overcome these issues, Organisations have to start doing secure code review in the development phase itself.

Are your Apps meeting the Security standards?

When organizations have decided to do the security practices such as secure code review and security assessment, they have to follow flawless approaches. If not, they are still vulnerable. When you have decided to do security practices, always follow the industry standards and methodologies. To find the mobile app vulnerabilities and to use it in development phase, you can incorporate the standards like OWASP, CWE, ZTF (Zero Trust Framework) for mobile methodologies.

Are you using third party libraries?

Most of mobile applications need third party libraries to create an needed functionality, or purely a hybrid based on other development frameworks like Xamarin, Cordova, etc. If any of the used libraries or frameworks has vulnerabilities, it will affect the whole application security, then attacker can use this flaw to compromise the users.

Is your data stored safely?

Most of the security measures can be easily bypassed if data isn’t stored properly. Most of mobile applications have the requirements to save user data, or preferences of the apps in their private directories, but are we doing it correctly? It’s a doubt only because security measures like authentication, authorization, and certification pinning are preventing identify theft, Broken access control, privilege escalation and other attacks, but it can be simply achieved by changing or capturing the preference files in the app’s private data.

The following are some areas that OWASP mobile security project has listed for developers to focus more:

To save data securely in android and iOS, each platform is giving more options. Developers have to encrypt the data which is locally stored in db, xml files and also process the user data in API with backend, and reduce to store the user data in local.

Have you deployed tamper detection or RASP in your mobile apps?

When we are taking a survey of mobile application attacks, most of the times it is achieved from package level itself by doing reverse engineering attack and repacking the apps which leads to run-time level attacks such as tampering values. By implementing tamper detection or RASP in your mobile apps, they will increase the complexity to analyse and attack the apps by attackers. Organisations can implement code cert signing verification, RASP solutions to prevent from runtime attacks, and tamper detection for preventing from repacking the apps and significantly preventing apps running from jail break/rooted phones.

Are you doing security testing before releasing the apps?

If yes, it means you are concerned about security. If not, then your app’s and user’s security are at risk by intruders. Organisations should do the security testing before releasing the apps in production environment. Also, it’s important to do the security testing after releasing in the production environment because it gives testers a full potential to do the testing from the attacker perspective, and the testing results will expose the external attack vectors.

Are you secure against authentication and authorization attacks?

Authentication and Authorization are the two areas which needs more focus to be secure and that’s why it’s being listed in the OWASP mobile TOP 10 2016 attacks.  Both the mechanisms are important for mobile app security because if one of them fails, it leads to total takeover of the user’s account. For authentication, developers have to implement security practices like password policy, preventing brute force attacks to cover the authentication areas like forgot password, login page, changing password and so on. Implementing two factor/multi factor authentication helps to protect against authentication attacks, by having OTP login or verification code to mails and with biometrics.

Now a days, mobile applications are purely dependent on API for its Authentication and Authorization, and so if the API is weak, your App is not secure. Implement Access control mechanisms over APIs as well. Do a separate assessment for API security.

Are your users using patched version or not?

When you are releasing the application updates with security patches, make sure it reaches all the end users before hacker makes a move because they look for apps that don’t release security updates. However, users updating the apps can vary. Make sure the users update the apps that contain critical patches.

The above are some of the best practices that developers/organization can follow to secure their mobile applications and these should be done properly. Organizations should focus more on mobile application security because, compared to other applications/software products, mobile apps are having high exposure in terms of security.

Now a days, there is a growing indication of mobile hacking threats and they are for sure to be proliferated in the far and near future as malicious Hackers wont rest until they trap all the needed information in their nest. So what are we going to do and how can we ensure the certainty of our CIA?

To find best remedy on this, you can approach a top information security company like Briskinfosec. We at Briskinfosec, work with a dedicated team of reputed security engineers, whom strive with dedicated perseverance for establishing top notch security. Our security engineers have rectified various security issues in mobile applications, and also in other mobile security related issues, faced by companies.

Unlike other firms, we don’t follow the standards blindly. We have our own methodology – NCRDC MAST (National Cyber Defence and Research Centre) Mobile Application Security Testing) framework alongside with other legitimate frameworks for producing best results. We have been listed as one among the “Top 20 Most Promising Cyber Security Provider” by the “CIO Review” consistently for 2 years. We have also set the “India Book of Records” for identifying most number of vulnerabilities.

Our stakeholder, one of the leading telecommunications organisation provide excellent 3G/4G services, worldwide. They were suspicious of their data security after reading some breaches of other top companies. They instantly requested us to perform security assessment of their mobile applications. We performed complete assessment, identified, and completely eliminated the vulnerabilities in their mobile apps. To know it in detail, read our case study.

Do you think searching out for important and latest cyberattacks, the consequences of them, and others in a random manner- is easy?

Chill out! We prepare Threatsploit Adversary Report on a monthly basis that collects various attacks, their impacts, the reputation of companies tarnished, and much more. Just a single click on our above link, you’ll see what you wanted.