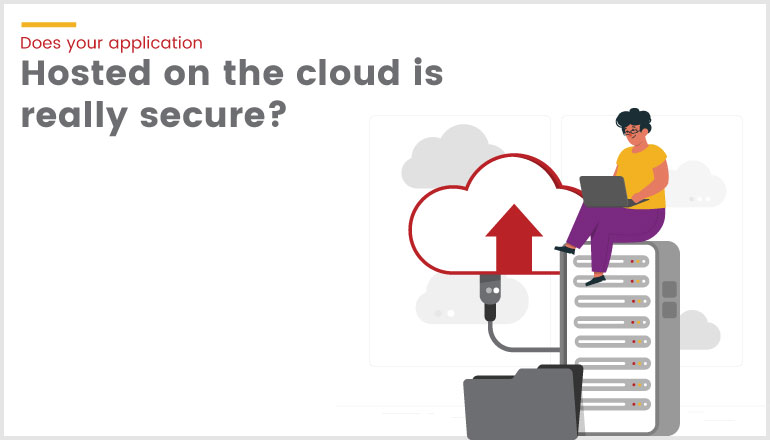 Does your application Hosted on the cloud is really secure?

For many years, security has been a key issue whenever data has be placed online, and the rise of cloud computing hasn't done much to ease people's fears. In reality, it had the opposite effect on many people. This is due to the fact that many consumers and businesses are adapted to storing their data locally. Even if it's not on their property, they want to know the precise location of the server hosting it.

In a cloud hosting scenario, users handle data via a virtual server that retrieves it from many locations, leaving them with the sense that they lack complete control over it. If appropriate security standards are followed, as we will see in a moment, these concerns are unjustified.

As with any other online service, cloud hosting must be built and operated with security in mind. However, what are the most important factors to consider while utilising the cloud to host an online project?

Who is accountable for ensuring the safety of websites that are hosted in the cloud?

Building a secure hosting environment is not an item that can be checked off a list. This process cannot and should not be stopped. The number of factors that should be carefully addressed is nearly unlimited, and the factors listed below are but a drop in the ocean. They should be plenty to give you a notion of the complexity of the task, however.

The fact that when customers choose a cloud hosting service, they are literally entrusting it with their website is one of their key concerns. Although outsourcing a service as complicated as website hosting is advantageous, it always increases the risk of insider assaults.

Employee error or intentional damage, hosting providers will not underestimate the risk of data loss due to employee error. It is possible to reduce the likelihood of such incidents by initiating extensive training for new team members, conducting more thorough background checks when hiring new employees, and developing a comprehensive incident response plan.

Another source of concern for users is the fact that, in most situations, many projects shares the same cloud. In this regard, it resembles a standard arrangement for shared hosting. People do not comprehend the fundamental distinctions between the two services, which is a major contributor to the issue.

Traditional shared hosting involves that all accounts end up sharing the same hardware resources of the server. Despite the fact that many virtual machines can exist on the same cloud, they operate as separate servers. It is a more secure configuration, but the hosting provider must still verify that the virtual machines are appropriately segregated.

Frequently, hackers successfully attack websites, and one of the most popular approach vectors is old software with known security flaws. Website administrators must keep up with their updates. Not only are new versions of popular open-source platforms like WordPress released to improve performance, but also to correct any security flaws discovered in the software.

Admittedly, changing a full application or even a plugin can affect the website's performance, and in severe situations, it can even result in downtime. Despite this, the security concerns of maintaining a website on an obsolete platform are too big to ignore, and hosting companies must give tools to help users.

A firewall is the most straightforward network security technology to build. It can determine who is attempting to access data kept on a website and whether they are permitted to do so. In the event of the worst-case scenario, the logs that firewalls maintain are frequently useful throughout the investigation and can assist affected website administrators in avoiding similar events in the future. A properly configured firewall is just as essential in the cloud as it is at home or in the office.

The botnet then tries to attack the web application with traffic and attempts to overload its server hardware. Due to the underlying infrastructure, DDoS assaults against cloud-based websites are typically less effective than those against websites hosted on traditional servers. However, there are additional client protection techniques and technologies that hosting providers must implement.

More than a few catastrophic occurrences affecting millions of people have motivated regulatory agencies around the world to set guidelines for adopting security tools and procedures over the years. These guidelines are applicable to both hosting companies and site owners, and organisations that manage to compliance with them to earn seals and badges to display on their websites.

Security experts claim these badges are overvalued. The standards provide guidelines on how they can enhance service and website security, but users and organisations make the costly mistake of believing they're done once they're fully compatible.

Server or hosting account security is a never-ending procedure. The attack surface and effective security procedures are always developing. Security experts believe that corporate standards are really not updated as frequently as they should be, thus gaining compliance with a standard isn't enough to ensure the security of your website or service.

Most people were worried about moving their websites to the cloud in the initial stages due to concerns over virtualization software. Virtualization was still a completely new idea at the time, so some of the worries were justified. However, a lot of time has gone since then, and cloud security has made significant progress.

The same virtualization that caused so much concern in the past is actually what makes cloud hosting safer than its more traditional counterparts. The operating system of a virtual computer interacts differently with the underlying hardware, which can prevent some of the hackers' strategies. On the other hand, the virtualization software needs to be set up correctly before the security benefits can be seen. Extra resources and safety measures are always requested.

It depends on a large variety of factors whether or not a hosting environment is safe to use. It's never a good idea to make general statements regarding security, such as saying that one kind of hosting is more safe than another. A poorly setup cloud server can be an easier target for hackers than a properly secured local machine, and vice versa. Furthermore, if the user safeguards their account with a simple-to-guess password, even the most secure hosting environment can be breached.

Cloud technology, on the other hand, empowers both website owners and hosting providers to deliver a reliable, consistent and secure service. It's up to us to make use of it.