Do you want to integrate the Threat Intelligence program into your daily security operations? | Briskinfosec 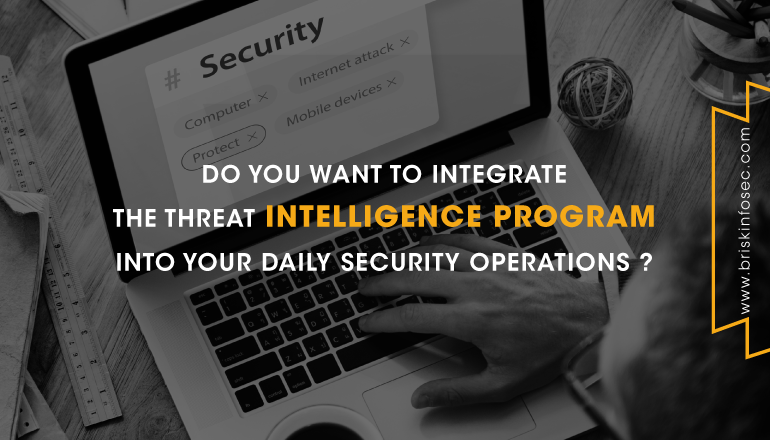 Do you want to integrate the Threat Intelligence program into your daily security operations?

There is a huge amount of the increasing use of sophisticated malware, and often organisations fail to understand the real intent of such activities by a large group of hackers, nation-sponsored attacks, organized cybercrimes, cyber terrorists. These attacks result in revenue disruption, damaging public and private reputation and demolishing business processes and workflow.

Intelligence is staying ahead of the next threat targeting to your organisation by implementing protective measures to protect your brand reputation, data, people, process and technology infrastructure. I am assuming whoever reading this article has a little bit of background knowledge on threat intelligence terminology.

Just having a Threat intelligence product itself is not sufficient, data should be collected, classified and correlated with hacking tools, tactics and techniques.

Remember, information alone is not actionable. Intelligence provides so much data, but a company should align intelligence feeds with proactive measures’ objectives to ensure the security to an organisation. If you are a third-party vendor and targeted, you can be the primary target of attackers to reach their final destination (which could be one of your largest customers as well).

Typically when a company is breached, their C level executives (CISO, CTO, etc.) have these questions in the boardroom meetings and they want quick answers to these questions:

There is a massive difference in threat actors of an early age and today's modern world. Previously organisations were mostly facing threats from cyber criminals and former employees who were acting either alone or in a small number of groups where these days there is a range of new threats coming from nation-state hackers to carry cyber espionage, sabotage and warfare to other countries, militaries, foreign governments. Hacktivist groups such as Anonymous, LulzSec, Lizard Squad, Syrian Electronic Army etc. Terrorists using a cyber world to spread fear and terror using social networking websites. Competitors hire third-party hackers for digital espionage.

Threat intelligence is all about collecting and analysing IOCs (Indicator of Compromise). There are two types of indicators:

Behavioural – If a chain of hacking tactics, techniques and tools are used to compromise a target, it falls under behavioural IOCs. For example, hackers use spear phishing technique to plant malware on their target system.

Data Derived – These types of IOCs are usually straightaway identified from the information involved in the incident such as malware name, malware hash value, domain name, etc. In this case, normally analyst takes one piece of information and searches it on the Internet and within the intelligence feeds. If the same sample is found acting in another part of the world, they can find or request technical analysis of that particular IOC.

Tactics, Tools and Procedures (TTP) – If an organisation can identify TTP quickly, it will help them to plan a response in a quick time. TTP can involve actor tactics, hash values, IP address, domain names, URL, email address, etc.

Cyber Kill Chain – It’s a process used by attackers. The blue team must align itself with the attacker’s cyber kill chain to proactively mitigate threats.

Threat intelligence cannot be served as a standalone program. It must collaborate with vulnerability management and security operations. Most of the companies are operating a variety of tasks independently such as threat analysis, network monitoring, end-point security, incident response, etc. If these processed are joined along with threat intelligence service, it can add more value to an organisation. For that following best practices are required to be followed:

A successful threat intelligence program should include:

Every attack method is covered in the MITRE framework

How many resources it may require to implement the entire program and use it for the first time.

Here I am assuming that this entire statistics and planning is applicable for SMEs and small firms having employees between 200-400.

Following areas must be calculated statistically on a regular period to define the overall state of the security over the period before and after the threat intelligence process is implemented:

Following are the two examples of statistics tracking on a monthly, weekly basis: