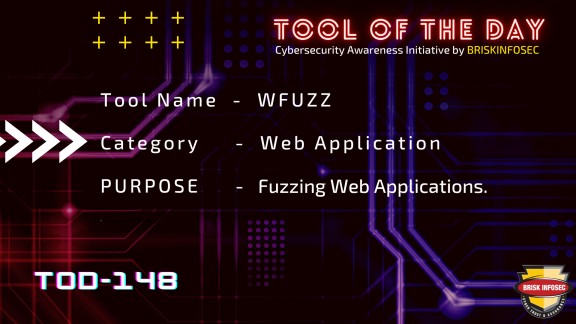 We can able to test for several types of vulnerabilities exists in the web application by the common method known as fuzzing. By using wfuzz we can test the input validation bugs primarily by fuzzing the application. A payload in Wfuzz is a source of data.

This simple concept allows any input to be injected in any field of an HTTP request, allowing to perform complex web security attacks in different web application components such as: parameters, authentication, forms, directories/files, headers, etc.

Wfuzz is more than a web application scanner:

Installation of wfuzz is really straight forward. You can install wfuzz using the pip. Make sure that you have installed python3.

You can either clone the public repository:

Once you have a copy of the source, you can embed it in your own Python package, or install it into your site-packages easily:

Type wfuzz -h for help,Wfuzz can be used to look for hidden content, such as files and directories, within a web server, allowing to find further attack vectors. It is worth noting that, the success of this task depends highly on the dictionaries used. By default wfuzz contains fuzzdb and seclists wordlists files some of the basic usecases of wfuzz are mentioned below:

Fuzzing the paths and files:

You often want to fuzz some sort of data in the URL’s query string, this can be achieved by specifying the FUZZ keyword in the URL after a question mark:

If you want to fuzz some form-encoded data like an HTML form will do, simply pass a -d command line argument:

To send your own cookies to the server, for example, to associate a request to HTTP sessions, you can use the -b parameter (repeat for various cookies):

If you’d like to add HTTP headers to a request, simply use the -H parameter (repeat for various headers):

You can modify existing headers, for example, for specifying a custom user agent, execute the following:

HTTP verbs fuzzing can be specified using the -X switch

Wfuzz can set an authentication headers by using the –basic/ntlm/digest command line switches.

For example, a protected resource using Basic authentication can be fuzzed using the following command:

The -R switch can be used to specify a payload recursion’s depth. For example, if you want to search for existing directories and then fuzz within these directories again using the same payload you can use the following command:

These are all the simple and basic usecases of wfuzz. Wfuzz must be one of the important tool in your checklist while you performing the security testing on web applications.Take a look at the wfuzz docs for advanced usecases.