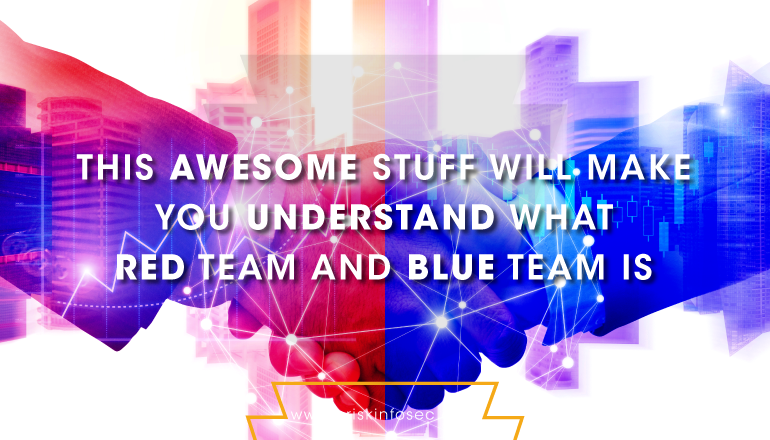 In this blog, we’ll discuss about what is Red Team and Blue Team, its significance, benefits and why companies should have them, in depth.

What is a Red Team?

The term “Red Team” is primarily used in military, wherein an individual or a group assess the defense mechanisms of a target in both physical and technological levels.

In cyber security context, Red Team act like black-hat hackers who target an organization and try to penetrate into their systems and security program levels. They usually identify the security loopholes in an organization, detect the backdoors, and exploit the vulnerabilities.

Red Teamers imitate all the real-world attacks by executing all the possible attacks that may hit an organization. A traditional method of doing Red Team assessment is by hiring a security connoisseur, skilled in exploiting security vulnerabilities and breaking into the organization security environment, possessing absolute ignorance about the organization’s defense mechanisms.

Usually Red Teamers do not follow phishing attacks or social engineering techniques that aims to procure employee credentials. They execute many advanced techniques for cracking the organization defenses.

Red Team assessment provides strong benefits and a better understanding about all the possible attack vectors which you may encounter. They alert you about the security status of your organization. Further, they provide you a checklist which tells whether an organization’s defensive mechanisms are in right place or not. This obviously spearheads towards the need of Blue Team.

What is a Blue Team?

A Blue team is very much alike to the Red Team. Even, they assess and detect all possible attack vectors that organizations may encounter but with one exception. They do it in a defensive way.

The Blue Team are a security team who defend the organizations against cyberattacks by fixing the security loopholes. They can be of two types like

Blue Team should to be aware about the malicious tactics, techniques and attacks, in order to build the response strategies around them. They are mainly intended to strengthen the organization’s entire network security infrastructure regularly. This is achieved by using software like IDS (Intrusion Detection System) that continuously monitors for malicious activities. Also, they offer security suggestions for the further improvement of the organization, thereby offering them many long-term benefits.

Some steps that a blue team incorporates:

Benefits of having a Red Team:

Benefits of having a Blue Team:

Who is best for an organization?

From the above, it’s is evident that both the teams are equally important. If asked to choose the important among them, it’s like asking whether the left or right hand is more important? There’s no sanity in choosing or investing in only one team. Both have their own set of uniqueness and admiration factors. It’s the duly duty of the red team to notify that what and how security disasters can happen while blue team assisting in resisting threats and improving defense mechanisms.

Only two hands can produce claps. Similarly, it is important for both the Red team and Blue team to work together, thereby forming an effective team named as Purple Team. This is very important in this digital world to stay secured from cyber threats.

A lot of security threats arise globally despite every single day ending off with some advanced security inventions. Honestly, in order to stay resilient against them, organizations need both of these teams to accomplish the best possible security that could be provided. Hence, we’d conclude that both the Red Team and Blue Team are highly essential.

How Briskinfosec can help you?

Briskinfosec has an indigenous Red team and Blue team whom are highly skilled in providing finest security quality to any organization. Our Purple team have set Briskinfosec’s name in the “India Book of records” by identifying the highest number of vulnerabilities. We’ve also been listed as “One among the top 20 most promising cybersecurity providers”, in security fulfilling demands. To know in-depth about us, kindly reach us out anytime.

Why don’t you our read our case studies? They contain the distinct security assessment strategies, executed by our security folks for successfully identifying and eliminating the vulnerabilities that were lurking in our client’s security environment. Just check them out.

Cyberattacks are increasing so much faster than we’d ever thought. In order to help you know at least the most significant ones among them in an easily understandable manner, we prepare Threatsploit Adversary reports on a monthly basis. Further, even the best possible mitigation measures are suggested to stay precautious against such threats. Instead of looking in search engines and websites and wasting time to know about all these, our report is a far better option. Just one click on it, you’ll like the ones in it.